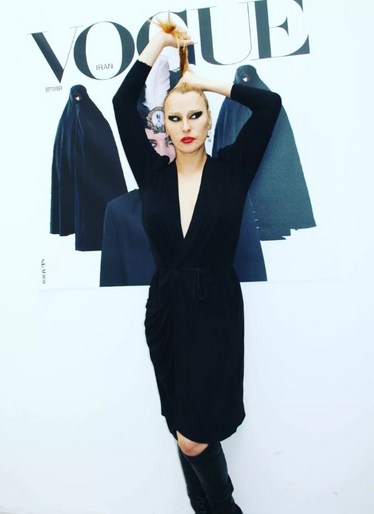 Niki M'nray grew up in Los Angeles, where she studied photography, art history, illustration and fashion design at FIDM, as well as Pasadena City College. It was during this period Niki became fascinated with the Supermodels of the early 90’s and the fashion world that came with this exciting era. Niki was inspired by Jean-Paul Gaultier, who at the time had revolutionized the industry by introducing eccentric models to his innovative & avant garde designs. Niki would apply makeup on many of her friends, style them up and then photograph them to make them look like the old-school Hollywood starlets. Word traveled fast and soon after she was introduced to the glorious world of high-end fashion & Hollywood.

Niki soon realized that in order to be at the epicenter of the fashion industry she had to relocate to the Big Apple. It was there in New York City she became a firm fixture in the exciting nightlife, and as a teen started working at the make-up counter at the legendary store of Patricia Fields.

In 2002 Niki relocated to Dubai and Tehran, where she started her transition and had her gender reassignment surgery in 2005.

Soon after Niki returned to the bright lights of New York and started a brand new life for herself. Working at the MAC the makeup counter and assisting make-up artist Pat McGrath, she found herself in Paris working on the Dior couture show, designed by John Galliano. From there it was non-stop and Niki traveled every season to Milan and Paris, alongside Pat and worked on the creme-de-la-creme of runway shows.

It was in 2010 that Niki started her own freelance career as a makeup artist. It was a chance encounter with Nicola Formachetti in Paris that led her to being booked on her first Thierry Mugler campaign. The rest as they say is history. Within months Niki was catapulted to the forefront of the industry working with iconic talents such as: Rhianna, Ciara, Hailey Bieber, Gigi & Bella Hadid, Jessie J, Troy Sivan, Ansel Elgort ​&​ Lauren Hutton.

Niki is also an accomplished multimedia Artist and has had exhibitions in Paris, New York and Art Basel Miami .

Niki currently resides in Los Angeles.
X
Facebook Twitter Pinterest Tumblr
X
Download Please provide your email address and we'll send you a link to download a pdf of all the images in this album.
Sheet Spread Album